Moving to the front of the frame, it’s time to set the engine and transmission in place. There are lots of ways to do this, I have probably tried all of them. The best way I have found to set the engine is to use a piece of 1/4in by 2 inch angle or 3/8ths by 2. Locate the lower front motor mount hole in the front. I only build with Chevy engines. If other engines are used , a similar process can be used. Right now - I am going to use side mounts to see if this is the way I really want to go. Under the pan I have placed some blocks to support the rear. I am going to use an early Mustang steering box mounted on its side , so I have to do some mock up to see if this is going to accomplish what I really want. 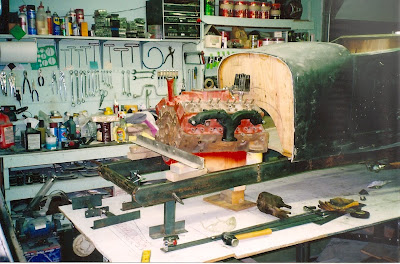 I’m also using traditional Ram horn exhaust manifolds because I think they look cool. I’ve set the body back on the frame to check everything out. As this is basically a high boy roadster ( only channeled 3/4ths of an inch) , I found that the engine set to low. Out comes the two by fours and now that looks better – engine manifold to center of the cowl. This type of set up allows me to center the engine in the frame and set the distributor to firewall clearance that I want. I usually set the engine so that I can put the meaty part of my hand – flattened out between the distributor cap and the firewall. 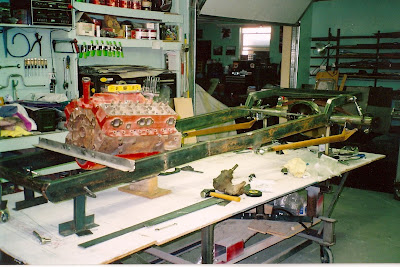 Now step back and see if the whole thing looks proportional . If not, readjust and check again.
Posted by Streetrod 101 at 4:15 PM No comments: