Now that the inner structure is complete , I needed to build out the area on the front of the door.  Since it needed to be built out about 3/8ths of an inch in the hinge area, I cut a one by two and a short piece of 3/8th in plywood and attached it with  a sheet rock screw in the middle to act as the spacer. 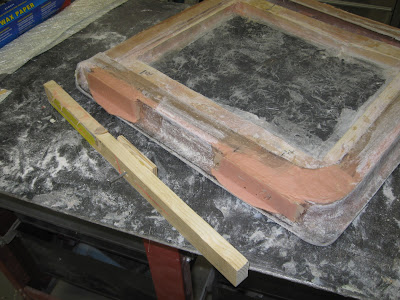 This picture shows the spacer assembly held in place against the door with masking tape actually holding it to the door.  Then I mixed up some fiberglass bondo and forced it between the door and the spacer , having first covered the one by two with wax paper to keep the bondo from sticking to the wood. 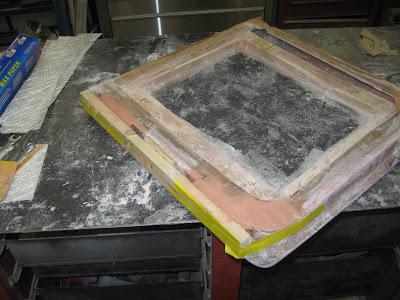 I determined where I wanted the latch mechanism to be located about 2 1/2 inches from the top of the door to the center of the latch. I then cut the opening using a carbide rotary file and cut the opening large enough for the latch to work ( release).  When that was complete, I lined up the latch and drilled the 1/4 inch mounting holes in the door.  There was a small gap where the latch and the door came together and so I wrapped the latch with wax paper, mounted the latch to the door with 1/4 inch bolts and then forced fiberglass bondo in between the two.  When it kicked, everything was removed and cleaned up and then reinstalled and final fit. 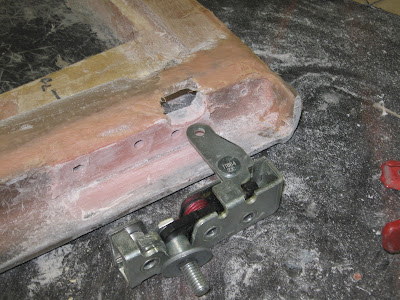 This picture shows that the top ear needs to be cut off so that the latch will function without interference .  A disc cutter was used for this purpose.  The left latch is shown for comparison . 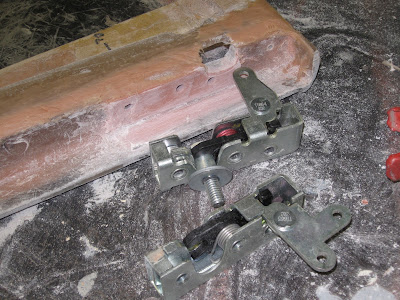 This picture shows the way it all came out after the  final fitting and cleanup.  When it comes time to finish the door for primer and paint, I will use ultralight bondo  to smooth everything up and detail the door. 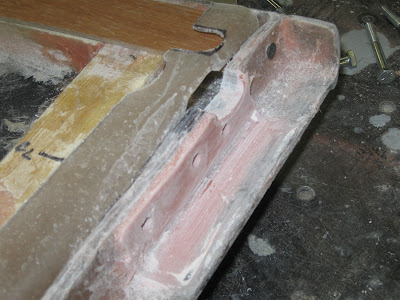 This picture shows the latch in place and everything working great.  These are the medium bear claw style latches. 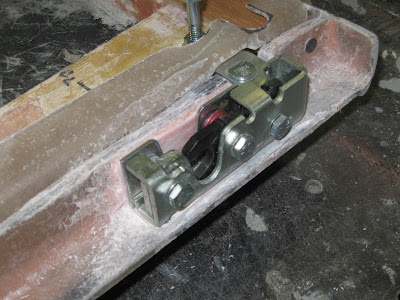